Seville Oranges arrived in the local market last week. They usually ripen at the end of January or early February in the US Southwest. Some folks (Tempe residents, for instance) can find them on their streets ready to pick from the ornamentals in the median. Up here in the left hand corner we have the honor of supporting the sellers and growers with cash. Which I am happy to do to get some good marmalade for the rest of the year.
Dorothy always had James Keeler's Dundee Marmalade in its ceramic pots with a paper hoop top. Made handsome drink containers and pencil jars when the last golden chunk of orange peel and sugar was scraped from the bottom.
The classic tale of marmalades origin is that a "canny" Glaswegian ship skipper overreached himself by buying up a cargo of oranges from Seville dirt cheap. Since he took his vitamins strictly in the form of single malt, he didn't realize how bitter his cargo was. Naturally, in his distress, he turned to his wife for assistance. Being a grocer's daughter she recognized the opportunity and invented marmalade on the instant. Likely that's marketer's blarney. But there is a strong connection of marmalade to Scotland.
To make a preserve of bitter citrus is not uncommon if you think of the various chutney's from India or the sour plum jam so highly prized in Japan. The recipe I take off from is to be found in Jennifer Brennan's: Curries and Bugles: A Memoir and Cook Book of the British Raj (try the usual suspects for used or new copies), which combines many fine Anglo-Indian recipes with memories of growing up in India in the late forties. There it betrays its Scot's roots in it's title: Granny Whitburn's Marmalade. I call mine Single Malt Marmalade.
To begin, you'll need about two and a quarter pounds of Sevilles, about six or seven, a lemon, some sugar and a decent single malt. For my taste the darker, peatier and smokier the better. Pity I can't afford Laphroaig. Dalmore's nice and Lismore works with the advantage of fitting the budget. But that is just me.
The first step in the process is to sharpen your knives. If you keep on top of them, that only means a whet or six to the paring knife. For more extensive operations go here, and here and then take your pluck in one hand and plunge in.
On your cutting board lay a square (better then a foot square} of cheese cloth. Remove the zest from the Sevilles and Lemon. 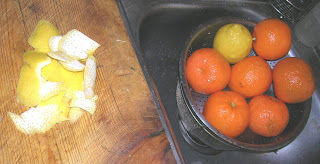 I had a half grapefruit rind left from breakfast so in it went. Zest is the outer skin which contains the color. When it turns white and soft its called pith. You can make the zest what you will. Line it up in military squares and chop it with a ruler. I do think using a micrometer in the kitchen is a bit absurd. Or cut it higgledy-piggley as you see here that
I prefer. 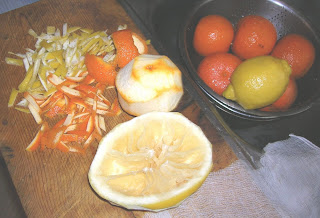 Quarter the fruit and pull the pith off the meat. Over the stock pot or jam kettle cut the quarter half through from the center and squeeze from either end to get the pips to gather in your fingers. These and the pith go onto the cheese cloth.The sharp knife makes this whole process go faster which is nice as at this point. If you have any cuts around your cuticles you will notice the intense impact of the acidic citrus juice on your digits.
Now the fruit and zest are in the pot and the pith and pips are on the cheese cloth, right? That's okay. Pick the pith out of the pot and put it on the cloth. Keep going until all the fruit has been prepared.
Now gather the corners of your cheese cloth around the pith and pips and tie it up like a hobo's bindle, ready for the stick. add it and a gallon of water to the pot and bring it to a boil. Let it sit there smiling away for a good three hours. Watch it until you are sure it won't boil over. 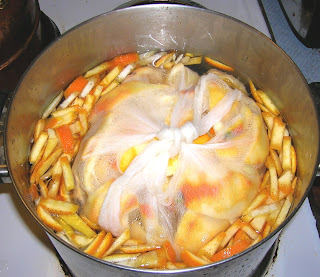 Let the pot cool and put it out of your way overnight.

The next day, pull the cheese cloth bag out of the marmalade and squeeze its juice back into the pot. That juice is full of the citrus' natural pectin. Discard the pith and pips ball.
Yesterday's boiling reduced the liquor to near half. Measure it into a clean pot and make it three quarts with fresh water. Add between six and eight cups of sugar. How much depends on the bitterness/ripeness of the fruit and your taste preferences. A second opinion is essential here at Dum Luk's because not every one is as found of tart/bitter as Dum Luk's himself is. (If you like the sweeter "California" style you might go to nine or even ten. But better would be to use Valencias rather than Sevilles and two lemons and a lime. The sweeter oranges need less sugar to balance them.) Set the pot at about half speed to bring it slowly up to almost a boil to caramelize the sugar and turn the juice a rich dark golden brown. This takes an hour and a half or thereabouts. While waiting you play find the pips. They usually are the round things floating next to the square cut peel pieces. Cheer up even though you know you found them all Aunt Tilly will extract one from her plate at the all important breakfast.
Towards the end of that get about eight twelve ounce jars, or equivalent, a funnel and a ladle ready to sterilize.
When the marmalade is dark enough to suit you, turn the heat up full to quickly raise the temperature to a jelly stage -- 2200f. at sea level. I keep a couple of steel ice cream dishes in the freezer for jam testing. Put a half teaspoonful of juice in the bowl and tip it so the juice cools rapidly. If it doesn't respond to gravity when you tip it upside down, beyond a yearning bulge in the direction of the floor, then its ready to jar and seal.
OOOPS! Greenman Tim points out I skipped a step. Before you jar... Remove from the heat. Add 3 tablespoons of single malt. Re heat for 1 minute. Let sit for fifteen minutes. Then jar. You can expect about 72 ounces. More than that makes a topping for ice cream (or fresh snow if you have any.) Less than that heads in the direction of juggler's balls. 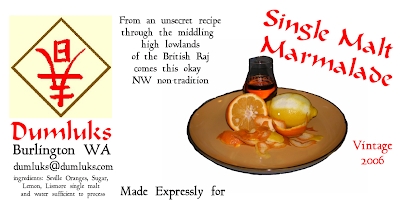