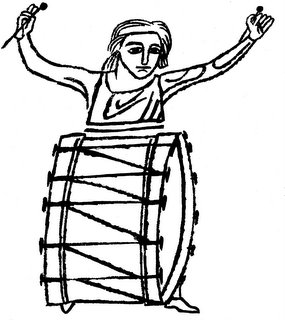 Drummer by Ben Shahn for "A Partridge in a Pear Tree"
Museum of Modern Art
Among my more gans organizert insistences are my observances of Christmas Eve. This day forms the barrier 'twixst Advent and Christmas. Advent is all anticipation. That is why it is the natural preserve of marketers. By the 23rd of December they have already turned their attention to Valentine's Day. Those unfortunates who let the retailers and the djs direct their attention burn out on Christmas almost before it begins. But Christmas is good for 12 days, minimum. You can get another week or so if you include the Ukrainian Christmas date.
Christmas Eve is about getting and decorating the tree, placing the gifts and reading treasured poems. A great family expotition sets off to a remote part of the island to a tree farm where after much, more or less, acrimonious high level discussions (as is said in diplomatic circles) a tree is hewn and tied to the roof for the return trip across the bridge to the mainland. The proprietors of the tree farm always have a plate of cookies in their shed and lovely sharp bow saws. As I am close to their last customer I make it a point to bring them a plate of our goodies in thanks for their cheer -- that always being hard work. Usually I never see them and just tuck the money under the plate. Maimonides tells us never to let the left hand know when the right hand is giving. I fell from that virture this year when one owner emerged just as we finished tying down the tree. My daughter sang out about the cookies and I was outed. In punishment the owner accused me of being "her Santa" and hugged me. I blush.
After dinner the tree is brought in and decorated. The ornaments are a melange of many years collecting. Some are hand made, and date back to our first tree over thirhy years ago. Others arrived this year. Then the youngest starts the present parade and the wraps and bows appear to complete the tree. Settled in with very few lights other than the leds on the tree, with our favorite beverage to hand, we begin to read aloud. Diana always reads "Disobedience" by A. A. Milne. (It might be more recognizable by it's chorus: 'James, James, Morrison, Morrison.') Then the daughter of the house reads "Winkin' Blinkin' and Nod." Then I read "King John's Christmas"
I first heard of King John's desire for "a big, red, india, rubber, BALL" a decade or more ago when Bob Oxley hosted the morning show on CBC fm. He read this poem every year. When he retired I took over the chore at least in our house.
But this year disaster threatened. When the quarter ended my daughter, in an excess of zeal, cleaned her room. The augean stables weren't in it. Many items thought to be lost forever, such as a copy of Beloved, a text for last fall, appeared from the unlikely spots where they lurked. Other items disappeared. This was the tragedy. One of the disappeared was her copy of Now We Are Six which contains 'King John'
Oh well. Sic transit gloria mundi and all that.
But No! Google to the rescue: Ta Daaaa! A search on 'AA Milne + King John' led me to the Hugo Schwyzer site which was new to me. There was the poem. A quick print and Christmas Eve was saved.
This is by way of a large thank you to Hugo and his Chinchillas.
We hope all and sundry enjoy the holidays at hand. Remember: a Christmas tree is not a mark of the end of Fall. Rather it is a sign of hope to bring us through the bleak midwinter.
--ml
Posted by Martin Langeland at Monday, December 26, 2005 No comments: Links to this post

Posted by Martin Langeland at Tuesday, December 13, 2005 No comments: Links to this post

Roy's more than superb meditation on the Nobel Laureate acknowledgement of Pinter reminds me of the card in Dr Shaffer's garage. It was a quote from one of his books, don't know which.
"A fact marks the place where inquiry was stopped."
At the risk of lesse praeceptor I amend the thought for clarity:
A fact marks the spot where inquiry was interrupted.
Go mull.
-- ml
Posted by Martin Langeland at Monday, December 12, 2005 1 comment: Links to this post