Just Out of the Oven 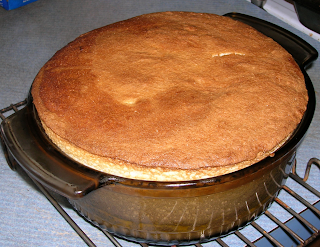 So the summer's visitors -- both small and big people -- have come and gone. The swelter the week before led The Kidtm and I to purchase an abundance of lemons for to make lemonade and add to iced tea and fish and water and just 'cause. Then the typhoon bowled in with the guests bob-a-rag tagging along. Cold and wet -- not really lemon weather. So some are left. 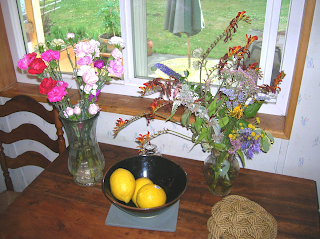 To make lemonade:
Grate the zest from one, or more, lemons. Squeeze the juice from three, or more, lemons into a measuring glass. Pour into a sauce pan and heat. Add the same quantity of sugar -- or, to suit the lemons or your taste, more or less. When the sugar has dissolved add the grated peel (of course to taste).
Here is a fork:
If you are making a pitcher of lemonade: add as much water as lemon juice and pour the result into a suitable pitcher filled with ice. Kid test the result and adjust accordingly.
Else:
Bottle the syrup for cooling and refrigeration. Make the lemonade by the glass. Dilute with a soda siphon. Add a shot of vodka or Gin for the big people. The Kidtm likes flavored vodkas and has tried several with reported mixed results. Some are good. Others not so much. Your taste will be your guide.

But there are those three lemons left in the picture. Ah!

Lemon Cake Pudding
Set oven to 3500f. and butter a 2 quart casserole.
Mix a cup of sugar, a half cup of flour, with a half teaspoon of baking powder. Separate 3 eggs and beat the whites stiff. Beat in, a spoonful at a time, a half cup of sugar. Reserve. Without cleaning, use the same beaters to beat the yolks light. Add the grated peel of a lemon, a half cup of lemon juice, 2 tablespoons of melted salted butter, and a cup and a half of cream or milk. Stir into the flour mixture and beat until smooth. Now fold in the egg whites thoroughly. Pour into casserole and bake for 45 minutes in a pan filled with a half inch of water. Now the hard part. Chill at least one hour.
--This is a family favorite of Diana's but a milder version appears in Fannie Farmer's tenth edition as "Baked Lemon Pudding".

Chemistry works the magic of floating a cake on top of a pudding out of the unified batter you put in the oven. People make the magic of disappearing it almost at once.
--ml
tags: Dum Luks Ordinary, lemons
Posted by Martin Langeland at Tuesday, July 24, 2007 No comments: Links to this post 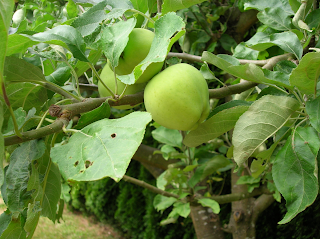 Rhubarb, strawberry, blueberry, blackberry, peach, pear and plum: the summer pies arrive!
The picture is of my tart pie apple tree whose luscious tee-totally lip-puckeringly sour apples start falling off the tree en masse about the second week of July. I don't call them "ripe" so much as "ready". So I pick them up and I pick them from and I make a batch of my very own Dum Luk's Sauce (Follow link to find out how) and I make an apple pie. Like this:

Pastry is the reaction of flour and fat to heat. Gluten is a valuable ingredient in flour if you are making bread. Well developed gluten encloses gases released by the yeast as bread rises. Without the gluten the dough would pass the gases, so to speak, and collapse. But in pastry well developed gluten makes the crust as tough as shoe leather. Work quickly and lightly when mixing and rolling pastry. Roll the dough in one direction only to give the gluten as small a work out as possible. Use pastry flour or flour that is low in gluten (a soft wheat, not a hard wheat) and free of the most glutenous parts of the wheat grain. Keep making it and before very long you will receive accolades for your pies. Here's my current implementation. It freezes well for other times of the year. The lard does make a difference to the flakiness of the crust, while butter provides flavor. There are many other fats that work as any basic cookbook will show.
Pie Pastry
Yield: 3 Pies
-ml- Lard to make it flaky,
Butter to make it tasty.
1/2 cup lard
1/2 tsp salt
1/2 cup butter
2 tbl ice water, approx.
21/2 cups flour

Cut lard and butter into flour and salt
until the texture of coarse meal.
Add just enough ice water to
gather the pastry in a ball. Chill.
Cut in thirds.
Roll one third out for each crust.
Prick all over the bottom
for a crisp pastry.
This makes pastry for
a one crust pumpkin
and a two crust mince.
-- Thanksgiving Afters, Dum Luk's

Any basic cookbook will provide several variations on the idea of flour, fat, liquid to make a crust. Once I met a cook who insisted that bisquick made the only acceptable pie crust. Maybe so. But I call that cobbler, not pie. You may call that a distinction without a difference if you so desire.

But pastry is not quite half a pie. Filling is the balance. Filling is fruit and sugar and flavorings and thickeners. Meat, vegetable, fish and fowl fillings are a different story for another time as are nut pies.
Whatever your fruit, rinse and drain it. This should leave enough moisture for most ripe fruits. Slice if needful and put enough in a bowl. Add as little sugar as needed. Learn to appreciate the tart-sweet spectrum. It will broaden life's pleasures. Add such flavorings as fit: lemon for a sweet apple or berry, nutmeg is always good. Try anise with apples as well as the more usual cinnamon and cloves. Cardamom intrigues.
Flour thickens best if added here and stirred with the fruit to spread it around. Added separately it tends to clump and miss the juice. Instant tapioca also works.
With the filling ready, roll out the pastry to line the pie plate. Again it is liberty hall to make any shape from a shallow tart with fluted edges to a square deep dish. Pour in the filling with any juice that 'sweat' from the fruit. Top or not as you prefer with pastry lattices, or relief sculptures, or nubbly vistas of brown sugar, flour, and nuts adhered with butter.
Bake -- on a drip tray to save the mess in a moderately hot oven about 4000f. for 25 minutes or as long as it takes. Stick a fork or toothpick in a visible piece of fruit to test for doneness. The juice should bubble and look glossy thick. The pastry should be brown. Serve it with sharp white cheddar or fresh churned ice cream. Down it in milk or cream or whipped or just a modest continent of sour cream. All right, yogurt if you wish. Have a slice for breakfast to empty the plate for the dishwasher.
Then there's peach pie ... for another time.
--ml
tags: Dum Luks Ordinary, summer pies
Posted by Martin Langeland at Sunday, July 15, 2007 No comments: Links to this post

Wednesday it was over 900f. here in the never-gets-too-hot Northwest. 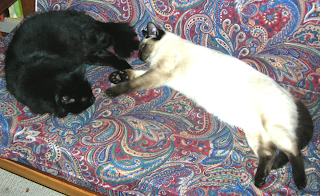 Giving the Raspberry to Salmon

The Kidtm said: "Ooohhh! Look!" and presented a side of wild king salmon. Into the cart it went.
This time I tried a new method. Lay the fillet skin side down on a large sheet of heavy duty aluminum foil. Dot with butter.
Cover closely with fresh mint leaves. Top that with a half pint of raspberries and a quarter of a cup of cream. Slice up a lemon or two for the only trickle down that works on the topmost layer. Fold the foil around the fish crimping the edges to seal and place over a charcoal fire to poach about 20 minutes.
No reason you couldn't do it in the oven, or in a fish poacher.

We served it with homemade French fries using my favorite red potatoes, though the Kidtm prefers Yukon golds. She made a sautè of mixed summer squash and a bouquet garni from the herb patch. She left out the shallots which would have improved a good dish. Then she made her famous tartar sauce which is a base of yogurt and sour cream with a healthy dab of mayonnaise and Dill relish -- a local product from a neighborhood farm stand. Seasonings include dill, garlic, cayenne, celery seed, what ever seems worth trying.
McGear who is a gallant trencherman as well as a chef of repute, brought a modified version of a Rio Star Grapefruit Pie from a recipe he found at the Texas Citrus Exchange site. (Scroll down). This is grapefuit in strawberry jello in a short pie shell topped with whipped cream. Very easy to eat!
We finished the evening playing one of the funniest rounds of Uno I have ever experienced.
Enjoy the local fruits of your season!
--ml
tags: Dum Luks Ordinary, salmon
Posted by Martin Langeland at Sunday, July 08, 2007 No comments: Links to this post

The clearest proof of our collective irrationality is our insistence -- in the face of the evidence -- that we are rational.
--ml
tags: aphorisms, Dum Luks Stockpot
Posted by Martin Langeland at Friday, July 06, 2007 No comments: Links to this post

The history of fireworks goes back thousands of years to China during the Han dynasty (~200 B.C.), even long before gunpowder was invented.It is believed that the first "firecrackers" were likely chunks of green bamboo, which someone may have thrown onto a fire when dry fuel ran short. The rods sizzled and blackened, and after a while, unexpectedly exploded. Bamboo grows so fast that pockets of air and sap get trapped inside of the plant's segments. When heated, the air inside of the hollow reeds expands, and eventually bursts through the side with a long bam!

The strange sound, which had never been heard before, frightened people and animals terribly. The Chinese figured that if it scared living creatures so much, it would probably scare away spirits - particularly an evil spirit called Nian,who they believed to eat crops and people. After that, it became customary for them to throw green bamboo onto a fire during the Lunar New Year in order to scare Nian and other spirits far way, thus ensuring happiness and prosperity to their people for the remainder of the year. Soon, the Chinese were using bursting bamboo for other special occasions, such as weddings, coronations, and births. The "bursting bamboo", or pao chuk as the Chinese called it, continued to be used for the next thousand or so years.

Before I was allowed to mess with lady fingers, ash cans, or cherry bombs, (and before I had the pocket change to buy my own) Henry took pity on my innocence and offered the following sweet corruption which he called a "Chinese fire cracker". I doubt that makes sense any more. Lest it offend, let's call it a toothpick fire cracker. 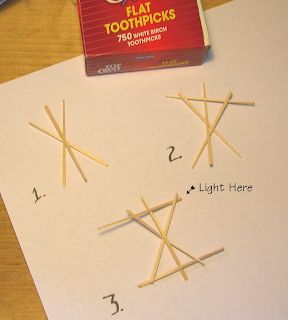 Step 1.: take three flat toothpicks. Form and 'X" and place the third upright in the middle. Hold the junction carefully with two fingers.

Step 2.: Take a fourth toothpick and weave it through one end so that two opposite ends are on one side of the toothpick while the central pick is opposite.

Step 3.: Weave a fifth toothpick through the other ends the opposite way.

Light one corner and wait for the surprise.

It is important to use flat toothpicks. Round ones aren't supple enough to make the tension structure.Matches are required. So "safe" is a matter of individual care. Do, please, be careful.
And enjoy a glorious, undamaging. Fourth.
--ml
tags: Feast of Holidays, toothpick firework
Posted by Martin Langeland at Tuesday, July 03, 2007 No comments: Links to this post