Saturday, April 28th, 2007 was this blog's second anniversary. The Kidtm was showing off her excellent cooking skills to her boy friend, the MacGears and us. Much hilarity ensued as four twenty somethings and a three year old reenacted the gunfight in Support Your Local Sheriff using bubble pipes, guns, and Rube Goldberg contraptions. Dinner was her set of original variations on Rachel Ray's Korean BBQ flank steak on hot and sour slaw salad (30-minute Get Real Meals, Clarkson Potter Publishers, 2005, pg 71) plus foil roasted potatoes. Mac Gear bought an outrageous pineapple fruit cocktail upside down cake. Perhaps he'll oblige with the recipe at his place. Such frivolity is sufficient excuse to delay this post. Sunday's excuse is that the swamp finally drained enough that I could mow the back 0.040 acres.
Posting nearly doubled, while page views jumped from something like 2400 to 6658. Of the last 100 viewers the US provided 65. Unknown Country (home of the wild 'any key' tree) coyly supplied 9 reticent lurkers. Canada claims 7 to the UK's 6. Australia stumped up 2. One each came from Korea, China, the Czech Republic, Japan, South Africa, Kazakhstan ("Borat again? Tell him I gave at the car wash!"), Norway, New Zealand, the Philipines, Taiwan and Iran.
Maybe 18% come just to see what's new. The remainder landed here as a result of appropriate search words. How to avoid farting when eating beans? or similar wording is the most popular which makes my post about Cowpoke Beans the must often visited.
Techorati has tracked over 50 million blogs and places Dum Luk's 373,737th. That would seem to place me in the top 1% of bloggers. Alas only the top 0.1% make any money at it.
The Truth Laid Bear has raised my status from a multicellular organism to a wiggly worm with a ranking in its more discriminating ambiance of 24,425.
Of the 957 people who have looked at my Numly Copyright notice since I posted it -- in March I think -- 5%, or 41 people, have voted, with half saying thumbs up and half thumbs down. Given the cussedness of our species I think that's a compliment. If I'm wrong, no good purpose will be served by stepping out of your way to tell me so.
The most important point is that, who ever you are, for whatever reason you came, and whether I satisfied you or not, Thank you for giving me the chance to entertain and just possibly add a bit to your store of knowledge.
--ml
tag: Dum Luks Community, blog statistics
Posted by Martin Langeland at Monday, April 30, 2007 No comments: Links to this post

A commenter some where who appeared on Digby's ' scope said:

Bush leveraged a national tragedy into reelection. He’s seeded the federal government with true believers, expanded executive authority while marginalizing Congress and appointing 2 radically conservative SC judges. He’s expanded government surveillance of our phones, e-mails, libraary borrowings, bank accounts and medicine cabinets. He’s stalled efforts to curb global warming, cut protections once provided by the EPA, FDA, and silenced scientists who dare refute the literal word of bible or the backward beliefs of those who claim to know the mind of the almighty. The US can now torture, imprision without providing cause and prosecute without allowing a reasonable defense. He’s built bases in the middle east, and fattened the bank accounts of those whose bank accounts were already obscene. The middle class — the masses — have not been so economically impotent in decades.

For such an idiot, this guy has been awfully successful.

That requires a fair amount of thought.
Consider the walnut shells and the pea.
hmm...
While misdirecting our attention he stole what he wanted.
Q.E.D.: Pirate!
--ml
tags: Dum Luks Community, pirates
Posted by Martin Langeland at Friday, April 20, 2007 No comments: Links to this post

The reason, at least in my mind, is that science is never unanimous. Consensus itself is a meaningless concept in science. Even a crank can be right, if his predictions come true. Science depends on the concept of testability, which in my mind makes it the most special system of knowledge ever devised. It is good that science is conservative, and it is good that it is slow, because both these things contribute to claims being tested properly.

Read the whole thing -- not to be ashamed for assuming so much too soon. but to learn how to have true patience.
If only I could. Sigh.
--ml
tags: what is science, Dum Luks Community
Posted by Martin Langeland at Wednesday, April 18, 2007 1 comment: Links to this post

Email ThisBlogThis!Share to TwitterShare to FacebookShare to Pinterest
Labels: Dum Luks Community, what is science

No News is Good?

It Don't Mean a Thing

I'm not sure it means as much as he seems to think - not yet, anyway - but yeah, me too.

It ain't got that

Was Anne Hutchinson arraigned
for contravening dogma?
or because she was a woman
who claimed to speak with God?

Washblog requested a blogswarm against theocracy this past weekend. A little late to the field I offer this disturbing -- to me -- experience.

At the request of a friend I am looking for audio components to complete her av system. It was a quiet Sunday with Diana and The Kidtm elsewhere engaged, so I thought it a good time to make my orisons at the Fields of Mammon. I arrived at the first big box store on my itinerary to find a veldt of asphalt unsullied with any personal utility vehicles. It was noon which meant that the ritual gatherings of that odd Fish sect were over. But the doors were locked. Printed on the glass were the hours of operation which included opening at 10:00 AM on Sunday. No placard indicated any temporary departure from this schedule.
The next bazaar on the itinerary languished in an auto-less desert. Its gates were barred and its electronic janissaries were fully activated with dire consequences to interlopers foretold. Printed on the glass: "Open Sunday at 10:00 AM". No notice explained the variance.
Yet a third asphalt steppe was bereft of leg atrophying devices. It's portals were steeled against invasion. Printed on its glass: "Open Sunday at 10AM". No sheet of foolscap contradicted the faux gold leaf.
Third time brought the frisson. That the marts were closed did not surprise me too much upon reflection. The Fish followers are numerous in the neighborhood. But we are not talking about a national holiday. Thus this is an unwonted courtesy on the part of Mammon's adherents. For the dominant religion of a culture to defer so to a set of minor cults, more myth than practice, is a splendid example of tolerance. Except ...
Except there was no notice given.
It was assumed that the public would know, without notice, of this grand gesture of public relations.
Farewell the republic.
--ml
tags: theocracy rising, Dum Luks Stockpot
Posted by Martin Langeland at Tuesday, April 10, 2007 No comments: Links to this post

Presents at the Creation

Well, almost.
A young friend, who claims to be a recovering Mac retailer, has just started a blog.
It's a good one.
Please take a look and see if you agree.
--ml
tag: Dum Luks Community
Posted by Martin Langeland at Monday, April 09, 2007 No comments: Links to this post 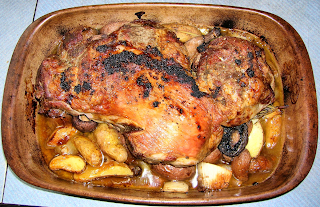 A butterflied boneless leg of lamb roasted atop fingerling potatoes, coarsely chopped onions, crimini mushrooms, and Brussels sprouts. Season with fresh rosemary, garlic, salt and pepper. Roast at 400o f. for 15 to 20 minutes per pound. Verify degree of doneness with a thermometer.
Also good with steamed or sautéed asparagus.
--ml
tags: Feast of Holidays, Easter, Passover
Posted by Martin Langeland at Thursday, April 05, 2007 No comments: Links to this post

Email ThisBlogThis!Share to TwitterShare to FacebookShare to Pinterest
Labels: Easter/Passover, Feast of Holidays

Eggs are the symbol de regeur for spring, resurrections and renewals. Hard boiled (so called) are a tasty way to celebrate Here's how.
I like a leg of lamb nicely oven roasted with rosemary and roots. But a ham is good too, especially like this.
For an elegant finish Pashka is marvelous.
Enjoy!
--ml
tags: Feast of Holidays, Easter, Passover
Posted by Martin Langeland at Monday, April 02, 2007 No comments: Links to this post