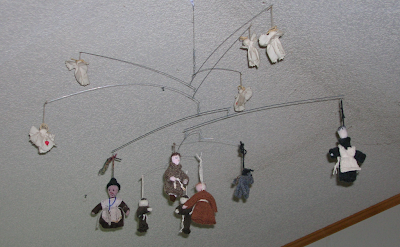 Mobile: Brother Heinrich
By DJS & ml
The English composer John Rutter delighted to tell the legend of Heinrich Susso, a 14th-century Dominican Abbot, who is credited with notating In Dulce Jubilo.


One night, as Heinrich finished trampling the monastery's grapes with the help of Sigismund, the donkey, on the way to Sigismund's stable, they saw angels dancing in the sky and heard their song. Heinrich attempted to notate the song for the choir to sing at Christmas. Sigismund helped him remember the tune at a crucial point in the bridge.

We first heard this on Jurgen Goth's Disc Drive in the '80's on CBC Stereo.  Seven or eight years ago DJS knit Brother Heinrich as one of her Sillies. Now the cast is complete, ml built a mobile to display them all.  Melissa hung the mobile.
--ml

Posted by Martin Langeland at Saturday, December 21, 2013 No comments: Links to this post